Most people decorate their bathrooms right? Especially their guest bathroom and/or master bathrooms. Some go to great lengths and expense. They install fancy showers, light fixtures, plumbing fixtures, faucets, towels, rugs, wall finishings, etc. But many people ignore their toilets!  Why??? And worse yet some still decorate their bathrooms with fuzzy toilet seat covers? SEE PROOF below. These images are from current bathrooms. Not to offend anyone but, YUK!! That’s really strange if you think about it. Please take a moment, think about it. Tell me what you think.  I dare you! 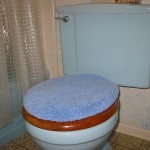 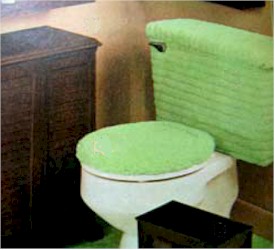 Granted, not everyone has the same taste in design.  For example – Topseat International sold some pretty bold designs of toilet seats over in Europe last year (over 10 million dollars worth)!  European tastes are different in general to that of American’s.  I get that. Many times whole decors are referred to as European, Tuscan, etc. But according to recent market research, American’s appear to have a comparatively more conservative type of style when it comes to bathroom decor. I don’t know why. I just know one thing for certain, no matter the price range of the homes I’ve seen, (I was a real estate in another life for several years), I’ve seen a great many bathrooms in a WIDE price range of homes, the toilets all pretty much looked the same.  They either had “rugs” on them, they were plain white or some sort of off-white and MAYBE just maybe a colored plastic.  Why?  Why do some people spend thousands of dollars to decorate their bathrooms but ignore the toilet.  It’s as if they are embarrassed by it and think, if I leave it as plain as possible maybe no one will notice I have one.  Some of our designs admittedly appeal to a small segment of the population, BUT recently, due to feedback we received on some market research we did, we added a new designer line to our seats. For example, CHECK OUT THE NEW ACRYL SERIES: 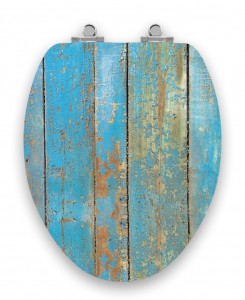 Click on this link for the latest addition of top of the line quality designer seats: Art of Acryl .  And if you don’t find these to your liking check out some of the other dozens of designs we have available.  Heck, even if you are conservative in your design, get a plain bamboo or wood seat!  We have those.  And, for those of you who are trying to hide your toilet, we now have plain white! Sure they are higher quality white seats than most if not all other toilet seats on the market, but due to demand we now have plain white as an option. But, sorry they still have chromed metal, or brushed nickel hinges and smooth hand sanded wood!

Believe it or not, Rolex® watches actually have a lot in common with Topseat Toilet Seats.  Time and toilet seats work well together. Below tells why:

Rolex’s tagline: “Symbols of excellence, performance, prestige and innovation”, can actually be used to describe Topseat toilet seats. Like a Rolex® watch, Topseat toilet seats have some of the best workmanship in their industry. Crafted from the finest materials and assembled with scrupulous attention to detail, Topseat workmanship is unmistakable. The beauty and craftsmanship stands apart. Often, just one look creates a conversation piece.

Aesthetically and structurally, like Rolex®, Topseat products are top of the line in their industry. TOPSEAT is a world leader in toilet seats design, production, and perfection, recognized internationally for top quality and innovation. For over one decade, Topseat has been a global trend setter. They are built to withstand wear, tear and are scratch resistant.

Topseat toilet seats, like Rolex® watches are handcrafted with high quality materials. Like Rolex watches each mechanism is made with top quality down to the last detail. For example, the wood core used for Topseat toilet seats is hand sanded using a special technique that provides a smooth finish unlike any other toilet seat. Topseat uses a high quality polyurethane coating which provides an extremely smooth, high gloss finish with outstanding chemical and abrasion resistance. The hinges are made from metal and  are chromed or nickel plated. Finally, the outer surface of the toilet seat lid includes beautiful graphics that use the highest resolution and the latest innovative technology.

Like a Rolex® Topseat uses cutting-edge technology and extensive expertise. Topseat also offers a wide variety of toilet seats to suit your style. The beauty of the high resolutions images are unique to Topseat. And, like Rolex® watches, Topseat toilet seats are made to both wow and endure.

Topseat customers want a top of the line product. They want quality, beauty, and the best innovation available. They want to make the following statement: “I purchased and deserve the best on the market.” Like Rolex® watches, Topseat toilet seats are a benchmark for style.

Don’t just take our word for it. Read the rave reviews and see how both Topseat and time have much in common.

1. In 2003, Topseat was the first manufacturer to produce bamboo toilet seats in industrialized production. After more than one decade, bamboo toilet seats perfected by Topseat are still very popular and sold worldwide under Topseat brand and other OEM brands.

3. In 2007, Topseat devised the TinyHiney Potty toilet seat with magnetic closure feature that secures the baby seat into the lid. With that feature, the TinyHiney Potty seat was a great success. This feature was then adopted by other manufacturers.

4. In 2008, Topseat created 3D toilet seat which became a great success in the international market.

8. In 2012, Topseat was the first manufacturer to produce, in industrialized production, a wooden toilet seat with a metal plate on top featuring embossing and relief effect.

9. In 2013, Topseat invented 3D Chrome toilet seat, giving images a metallic background and allowing metallic highlights to be built into the artwork.