No kidding. It’s an official holiday! World Toilet Day was adopted by 122 countries at the 67th session of the UN General Assembly in New York on July 24, 2013. Matt Damon is actively involved in this movement as the Co-Founder of Water.org. 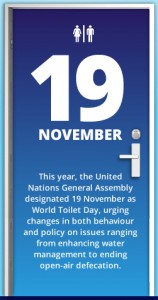 “This international day of action aims to break the taboo around toilets and draw attention to the global sanitation challenge.”

World Toilet Day was created to pose exactly these kind of questions and to raise global awareness of the daily struggle for proper sanitation that a staggering 2.5 billion people face. World Toilet Day brings together different groups such as media, the private sector, development organizations and civil society in a global movement to advocate for safe toilets. Since its inception in 2001, World Toilet Day has become an important platform to demand action from governments and to reach out to wider audiences by showing that toilets can be fun and sexy as well as vital to life.

World Toilet Day is not just about toilet humor, or an attempt to make toilets sexy. World Toilet Day has a serious purpose: it aims to stimulate dialogue about sanitation and break the taboo that still surrounds this issue. In addition, it supports advocacy that highlights the profound impact of the sanitation crisis in a rigorous manner, and seeks to bring to the forefront the health and emotional consequences, as well as the economic impact of inadequate sanitation.

World Toilet Days’ vision is to grow as a collective campaign uniting on November 19th everybody who is passionate about toilets to ensure that access to proper sanitation, which has been declared a human right, becomes a reality for all.”

Did you know that one in three people do not have a safe, clean and private toilet? Most of those people live in sub-Saharan Africa and Asia. Yet the humble toilet can be a stepping stone to a healthy life, greater human dignity, freedom, equality between women, men, girls and boys, and finally, a catalyst to the development of communities and countries.

Yet, in many parts of the world, toilets are an unglamorous topic and talking about open defecation and its consequences is taboo. However, bringing clean toilets to those who are lacking them, is not a matter of breakthrough scientific technologies; it is foremost an issue of political leadership, plain speaking champions, raising awareness and hard work.

It is up to everyone to turn the sanitation challenge around and make toilets sexy.

You can connect at: http://worldtoiletday.org/