A museum in New Delhi, India, which traces the history of the toilet for the past 4,500 years, has been ranked third among the world’s 10 weirdest museums by Time magazine.  “From simple chamber pots to elaborate decorated Victorian toilet seats, you’ll see it all” at Sulabh International Museum of Toilets tracing “the entire evolution of toilets throughout human history,” stated Time Magazine. 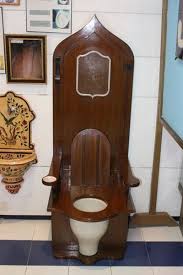 There’s even a toilet disguised as a bookcase, noted the magazine presenting “10 museums around the world that are anything but mundane,” to celebrate International Museum Day.  Now that’s a reading room 🙂

A highlight of the museum is the replica of the throne of King Louis the XIV. The king is believed to have used this to “do his business” while conducting court sessions.  Now that’s politics that personifies a leader that may be “full of it.”  I guess he was both “on his throne” and “king of the seat” at the same time.

“It is indeed a very unusual museum and it’s the only one of its kind in the world,” says founder, Bindeshwar Pathak.

“We founded the museum to give a message,” he said. “India faces a big challenge in the sanitation sector. So our museum helps policy makers understand the efforts that were made in this field in the past.”

So every significant product has a history.  The toilet seat was in fact an essential item before it was a product.  Toilets and toilet seats have a unique place in the daily lives of both people and nations.  We. Just. Can’t. Live. Without. Them. Period.  Thus, Topseat took both the toilet and the toilet seat to the next level.  Let’s face it, a toilet in and of itself is pretty boring.  However, add some spice, creativity, and innovation and you get the stunning and well-made Topseat products.

Why not make your bathroom into a modern day museum with our unique toilet seats?