1. In 2003, Topseat was the first manufacturer to produce bamboo toilet seats in industrialized production. After more than one decade, bamboo toilet seats perfected by Topseat are still very popular and sold worldwide under Topseat brand and other OEM brands.

3. In 2007, Topseat devised the TinyHiney Potty toilet seat with magnetic closure feature that secures the baby seat into the lid. With that feature, the TinyHiney Potty seat was a great success. This feature was then adopted by other manufacturers.

4. In 2008, Topseat created 3D toilet seat which became a great success in the international market.

8. In 2012, Topseat was the first manufacturer to produce, in industrialized production, a wooden toilet seat with a metal plate on top featuring embossing and relief effect.

9. In 2013, Topseat invented 3D Chrome toilet seat, giving images a metallic background and allowing metallic highlights to be built into the artwork.

Toilet seats are made using a variety of materials and methods. Most of our toilet seats, here at Topseat, are constructed using the most comfortable and durable methods – MDF a type of molded wood, and one product line using environmentally friendly Bamboo. The following is a breakdown of the processes and materials used by Topseat as well as those used by other manufacturers of toilet seats: 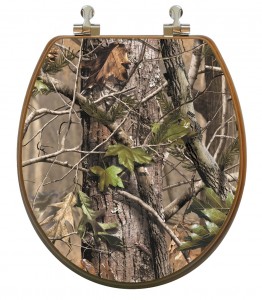